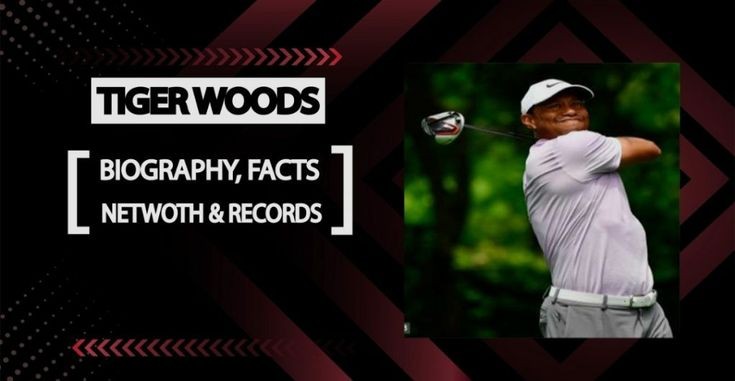 According to celebritynetworth, Tiger Woods Net Worth value is $800 million. The American ever since turning pro in 1996 has racked up almost $1.5 billion from endorsement, appearances and course design fees.

Sportarsh article on Tiger Woods talks about his biography, facts, NetWorth and records. When it comes to the game of golf, Tiger Woods is one of the biggest names. His records are there to back it up. Going into records, the American is tied at number one ( with Sam Snead’s ) for wining 82 PGA Tour Events.

In Golf majors, he ranks second with 15 titles and is the youngest player in Golf’s history to achieve the career grand slam.

We all know him as Tiger Woods, but his name actually is Eldrick Tont Woods. He was born on the 30 day of December 1975 in Cypress, California. Woods is the only child of his parents, although he has two half brothers and a half sister from his father’s side. His father is an African American man while his mother is from Thailand.

Tiger Woods was introduced to the game of golf by his dad at the tender age of 2. His father, who was an American soldier had access to the navy golf course. This gave Tiger Woods easy access to the facility to play and train.

With constant training and practice, he went on to win his first Junior World Championships at age 8. In 1994 Tiger Woods became the youngest player to win the United States Amateur Golf Championship.

After winning the US Amateur Championships, lots of college golf institutions came offering him golf scholarships. Of all the institutions, he chose Stanford university, and even selected Economics as his major. But his stay in college lasted for only two years. He left in 1996 to turn professional.

On August of 1996, Tiger Woods turned professional at age 20. He attracted top brands like Nike and Titleist, both deciding to offer him advertising deals. A year after turning professional he won his first major; which was the 1997 Masters Tournament, thereby setting the record for becoming the youngest player to win it. The year 1997 also saw him go top of the official Golf Rankings.

Tiger Woods mother was born in 1944 and goes by name Kultida Woods. She is from Thailand and was born in Kanchanaburi. Kanchanaburi is a small town outside of Bangkok. Though she is Thai, she has a little bit of Chinese and Dutch ancestry.

As Tiger Woods is her only son, she is very close to him and could mostly be seen cheering on her son at golfing events. She describes herself as a loner stating she doesn’t like to make a lot of friends.

I am a loner, and so is Tiger. We don’t waste time with people we don’t like. I don’t have many close friends. Never have.

in an interview with ESPN

As for Tiger Woods father, he goes by name Earl Dennison Woods and was born on 5th March 1932 in Manhattan. He was a former US Army officer and a Vietnam War veteran. He met his wife ( Tiger Woods mother) during his tour in Thailand on 1966. Two years later the couple moved to California and got married. Sadly Tiger Woods father passed away from cancer in 2006.

Tiger Woods has two half brothers and a half sister from his father’s first marriage. Their names are Earl Woods Jr, Kevin Dale Woods and Royce Renee Woods.

Earl Woods Jr is the eldest son, born in 1955. He has a daughter, Cheyenne Woods who is also a professional golf player. In 2013, Earl got himself into trouble when he called in a bomb threat at the building he worked (Department of Economic Security building). At about 8 am, he called the front desk and said he had a bomb and was going to blow up the building. But when he was traced and arrested, he claimed it was just a joke.

Kevin Dale Woods is the second child and is two years younger than Earl; born in 1957. Not much can be said about him. All we know is that he’s currently being confined to a wheelchair as a result of multiple sclerosis. A condition he was diagnosed of in 2009.

Royce Renee Woods is the third child and is 14 years older than Tiger Woods. She is the only female sibling of Tiger Woods.

Tiger Woods in his lifetime has dated a total of 8 ladies, with the first being his ex wife. Per media reports, the confirmed ones are only three. But other ladies also claim they’ve had an affair with the golf star.

Currently, Tiger Woods is in a serious relationship with Erica Herman. The couple met in 2017 at a restaurant. Per reports, the golf star lives together with her in the same house. Her support for her “to be” husband is second to none. And a prove of this is when they both kissed after Woods sealed victory at the 2018 Tour championships.

Rachel Uchitel relationship with Tiger Woods came to light ( exposed) in 2009. She was actually one of Woods mistresses and a part of why woods’s marriage collapsed. She expressed her disappointment in the way the media wrote about her. Further stating she owes no one else an apology except for one.

She added, I am sorry if I triggered something in people that causes anger or hurt in them. I clearly haven’t wanted to cause any anger in those people because that is not who I am and that is not a position that I want to put anybody in.

After nearly three years together, Tiger and I have mutually decided to end our relationship. I will always cherish the memories that we’ve created together.

Unfortunately, we both lead incredibly hectic lives that force us to spend the majority of our time apart. I will always admire and respect Tiger. He and his beautiful family will always hold a special place in my heart.

Jamie Jungers in an interview with ” the today show ” also claimed to have had an affair with tiger Woods. According to her, they met at a Las Vegas nightclub in 2005.

I didn’t even get a birthday card,” Jungers said during the interview. I got nothing out of this relationship but a broken heart.

Another lady by name Cori Rist also claimed to have had an affair with Woods. She claims she met Woods at a nightclub in 2006. The relationship lasted for only 6 months.

Cocktail waitress and one time reality show contestant Jaimee Grubs, also claims to have had an affair with tiger Woods that lasted for 2 years. Her relationship with Woods was sexuall, she claims and was hurt to hear other women were also involved with Woods.

Tiger Woods in 2017 came out to say, he’s no longer dating Kristin Smith. He came out to clear the air after the media reported the two were on vacations at the Bahamas. In a tweet it reads;

Contrary to the false Daily Mail article, Kristin Smith and I are no longer dating and haven’t since last year.

Tiger Woods met his ex wife Elin Nordegren in 2001 through his golf mate Jesper Parnevik. Elin had accepted a job offer to baby sit Parnevik kids. This allowed her to fly to the US. Woods begged Jesper to introduce him to Elin after spotting her with him at the 2001 Open Championships. Initially, Elin wasn’t interested in Woods but she decided to give the relationship a try.

The pair officially married in 2004. But as Woods infidelity issues came to light, the pair divorced in 2010. With Woods loosing closely about $730 million in divorce settlements.

Tiger Woods as we speak has two kids with his ex wife. Their names are Sam Alexis Woods and Charlie Axel Woods. It’s unclear if he would give birth to another child but you never know with Woods.

Sam Alexis Woods was born on 18 June 2007, making her the eldest. Charlie Axel Woods on the other hand was born in 2009 and is the last child of Woods.

Tiger Woods has two closest friends. As guessed, they are also pro golf players. They are Rory McIlroy and Justin Thomas.

Earlier this year (February 23, 2021), Tiger Woods was involved in a car accident. He suffered leg injuries and was hospitalized. Upon being discharged from the hospital to his home, both Rory McIlroy and Justin Thomas went over to his house to see how he’s faring.

Tiger Woods is notoriously noted for liking fast cars. The golfer has a range of impressive cars in his collection. It was his love for speed that got him crash his Genesis GV80 on February 23 2021.

Aside his family house, the golfer has had three houses. The first house he acquired after leaving the family house was a two story 2,000 square foot condo in Newport Beach, California, USA. According to sources, he bought the house for £2.2million. But his stay in the condo lasted for 6 years as he decided to put it up for sale in 2012.

After that he moved to Florida, settling at Windermere. Here he lived with ex wife Elin Nordegren in a gated private community (Isleworth Golf & Country Club). The 7,940 square foot property was worth £3.8million.

Woods currently lives in a £41 million mansion specifically built for him. The mansion has it’s own four-hole golf course, a 100ft swimming pool, an outdoor basketball area and tennis court.

Woods has a soft spot for dogs. In fact he loves dogs. So far he’s had four dogs. The first pair were Yogi and Taz. Due to health problems brought upon due to old age, both dogs had to be put down in 2019. Right after that he brought in a different pair. He named them Bugs and Lola. He loves his dog so much and has even trained them to fetch his balls for him.

Tiger Woods is a Capricorn. It is the tenth astrological sign in the Zodiac and people born between December 21 to January 21 fall under this. The symbol can be seen below.

Tiger Woods practices Buddhism. According to him, he was introduced to Buddhism by his mother at an early age; and practised it right from his childhood till he drifted away from it. He even attributed his infidelities to the fact that he drifted from the faith.

Buddhism teaches that a craving of things outside ourselves causes an unhappy and pointless search for security. It teaches me to stop following every impulse and to learn restraint. Obviously, I lost track of what I was taught.

Tiger Woods has been able to win lots of individual awards and also managed to set a series of impressive records. Below are some of them;

Endorsement and Tiger woods Net Worth

According to celebritynetworth, Tiger Woods has an estimated Net Worth value of $800 million. The American ever since turning pro in 1996 has racked up almost $1.5 billion from endorsement, appearances and course design fees.

Tiger Woods heroics on golf pitches also transcends off it. He has a foundation named TGR Foundation. The foundation was established in 1996 by him and his dad to support children in America. Though his father has passed on, the foundation still functions.

Sportarsh like to thank you for taking time to read through our Tiger Woods Biography, Facts, Networth and Records. You can leave your contributions in our comments section below. If you want to get updates from us, kindly click on the bell icon you see on your screens.